My grandfather, who taught me many life skills, perhaps most importantly how to spin a yarn, had been a head maltman in several famous distilleries in the Speyside area. My novel is dedicated to him.

Speyside is, of course, one of the main malt whisky producing areas of Scotland.

My grandfather and his family lived in Dufftown, in Banffshire. This town is famous in whisky terms, hence the old expression:

Indeed, the number of distilleries dotted around this small highland town rose to nine.

There are now six  functioning distilleries in Dufftown.

But back to my grandfather. He had started his working life as a ploughman, then worked as a forester before getting into whisky. He had seven children, my mother being number six. She was actually born in Glenfarclas Cottage,  which as head maltman at the Ballindalloch distillery he was given for a peppercorn rent.

My grandfather in centre with malt shovel c 1910, standing next to the seated Mr Grant

My mother always said that she hd whisky in her blood, because every day of her childhood she could smell the heady aroma of the malt.

A consequence of that, she always maintained, was that she had no need to ever take a dram, it was already in her system.

There were many occupations in the old distilleries. Maltman, mashman, still man, head distiller, involved in the production of whisky. But there were also cooper’s and coppersmiths.

It is said (and I cannot possibly comment) that distillery workers used to get the coppersmiths to manufacture coper dogs for them. Essentially, this was a piece of copper tubing which was soldered closed at one end and stopped with a cork bung on the other. It could be filled with whisky  and dangled by a cord inside the trousers to smuggle whisky out of the distillery.

Another more sophisticated receptacle was a copper flask. I  inherited one which is substantially larger than any hip flask. It’s top is a King George V ha’penny. It is curved to round the body, under the waistcoat. One wonders whether the ha’penny was a wink at His Majesty’s excisemen by whoever owned it! Suffice to say that it has had a special place on my desk as I was writing my novel Deadly Still.

Two of my muse-objects of inestimable use during the writing of Deadly Still!

Whisky connoisseur can argue forever about the merits of the different malt whisky producing areas. Far be it  for me to agree one way of the other. All I would say is that unlike the illicitly produced whisky in the novel, which should certainly be avoided, I don’t think there is such a thing as a bad malt.

But then, I still have not tried them all.

Now that I have DEADY STILL, the sixth Torquil McKinnon novel out of my head I’m planning to write  more regular blog posts about my writing. But just to get the ball rolling here is a wee map for you to see where the stories take place. West Uist is out in the Atlantic Ocean, South of St Kilda. 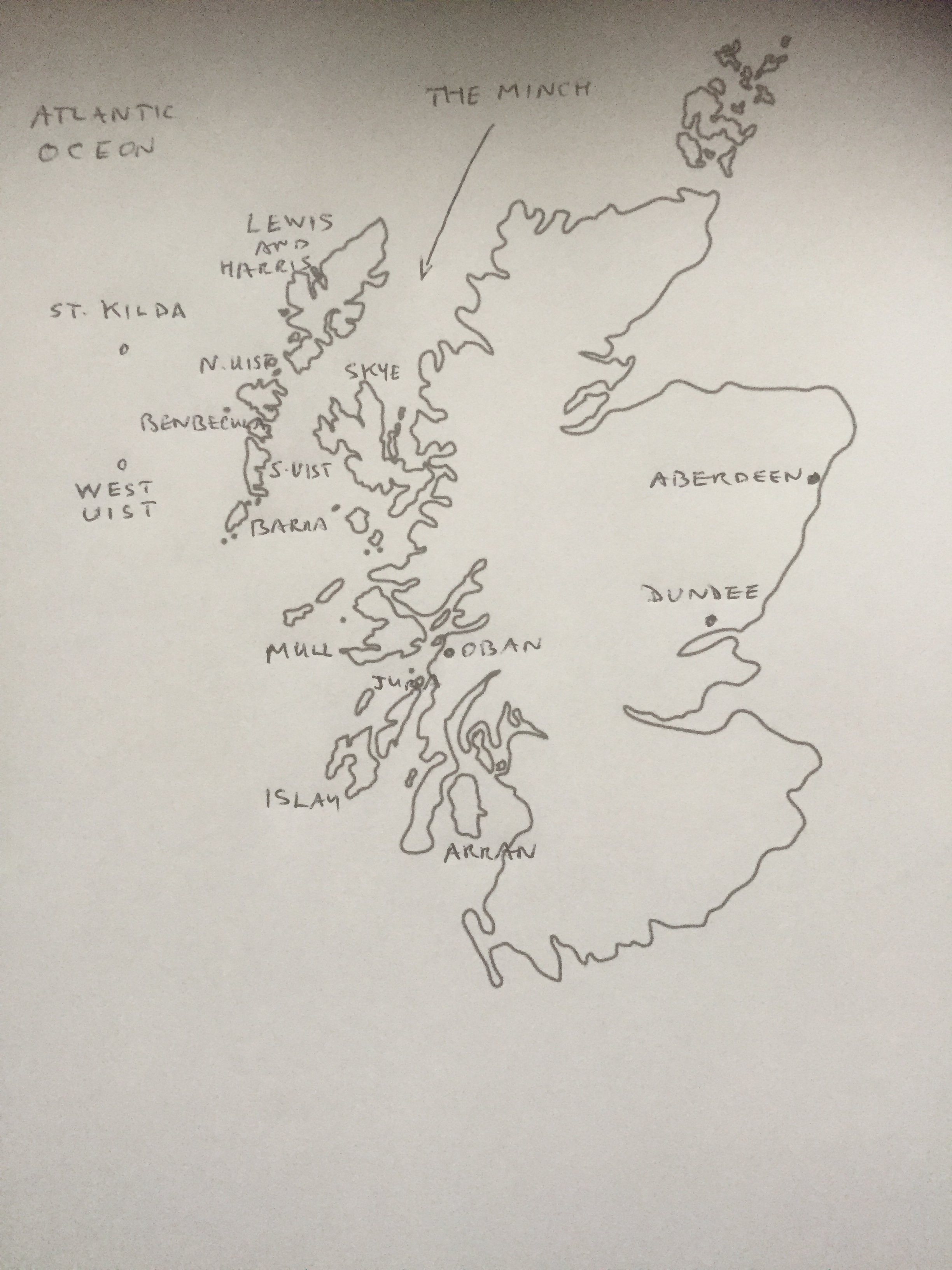 You’ll see the geography of the Outer Hebrides and some of the places on the mainland that are often referenced in the novels.

Dundee has a special place in my heart, as I spent several happy years studying medicine at the University of Dundee, before beginning my career as a house surgeon at the Bridge of earn Hospital and then Perth Royal Infirmary. 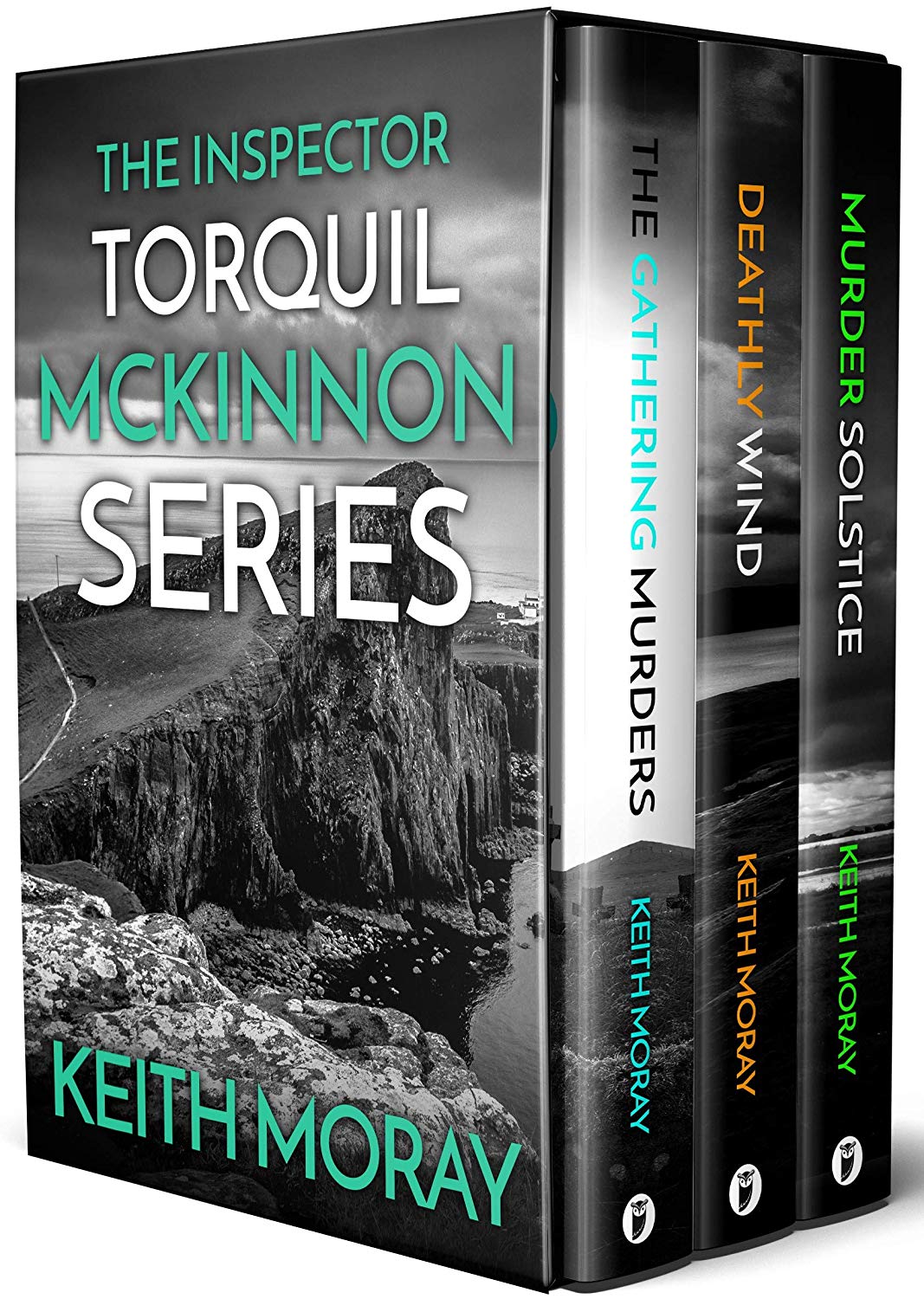 The boxset of the first three Torquil novels

Next blog, coming soon………Whisky in the Blood! 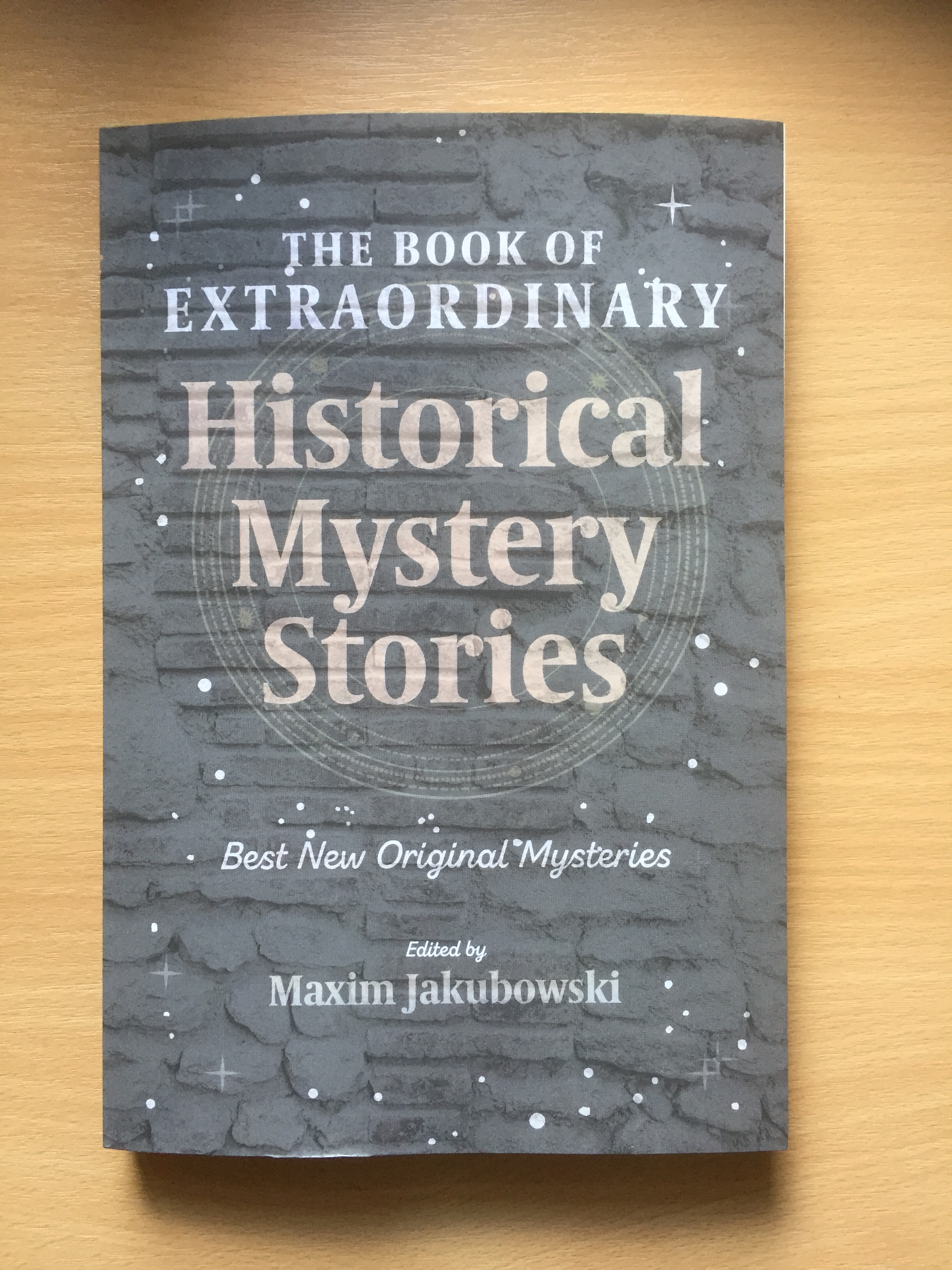 The Book of Extraordinary Historical Mystery Stories, an anthology  edited by Maxim Jakubowski for Mango Publishing. The story is set in Alexandria during  ancient Egypt’s Ptolemaic era and introduces  Hanufer, the overseer of police and Sabu, his sergeant. I hope to follow this up with at least one novel.

Alexandria is the city founded by Alexander the Great and was home to the Pharos Lighthouse and to the great Library of Alexandria. It was essentially a Greek city in ancient Egypt.

This is Hanufer’s first case upon being appointed by the pharaoh, Ptolemy Philadelphus himself. The body of a murdered slave is hauled out of the lake and before he can begin to track down the murderer he must first find out who the slave is and who he belonged to. 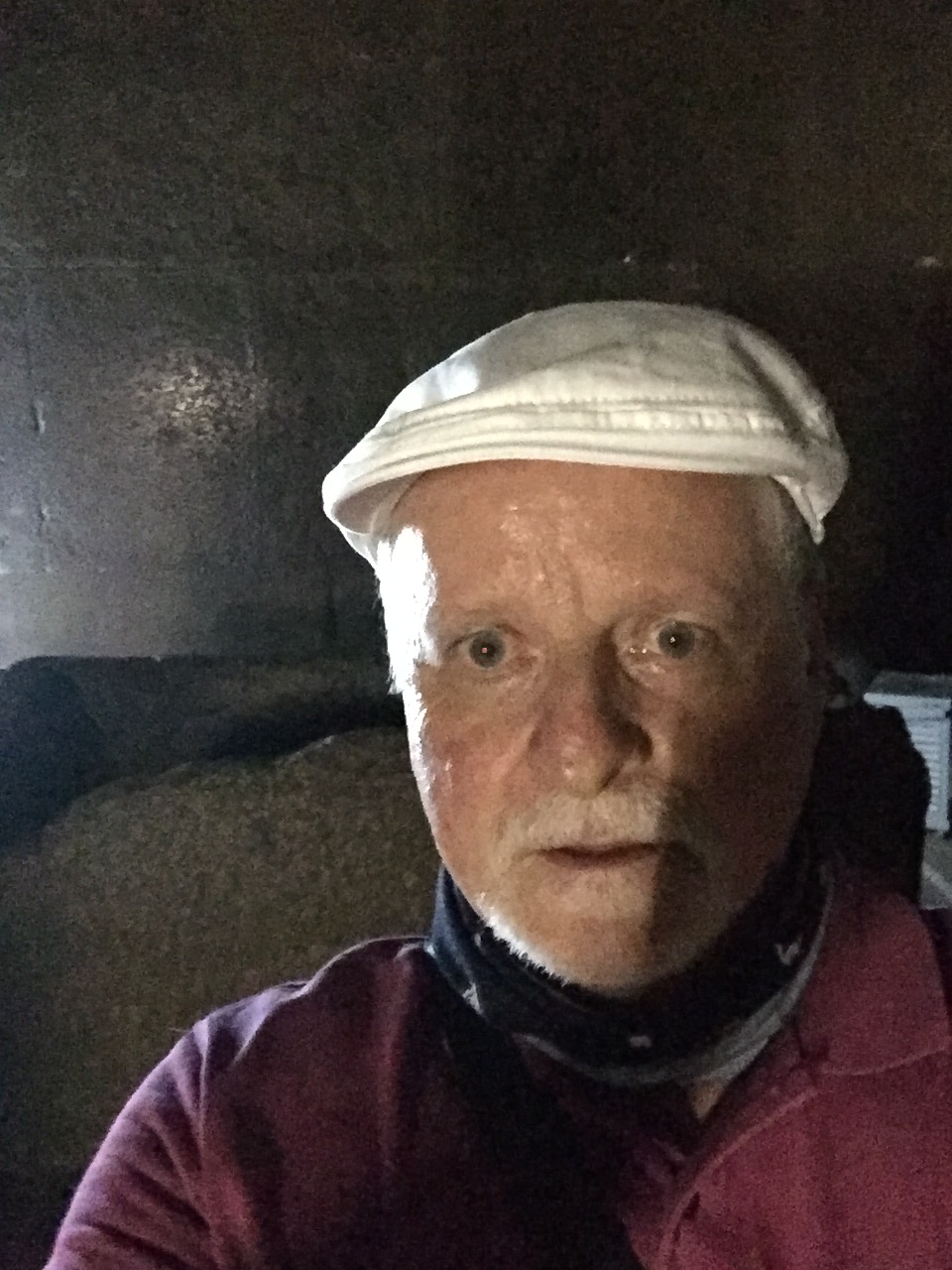 Alone in the King’s Chamber in the Great Pyramid 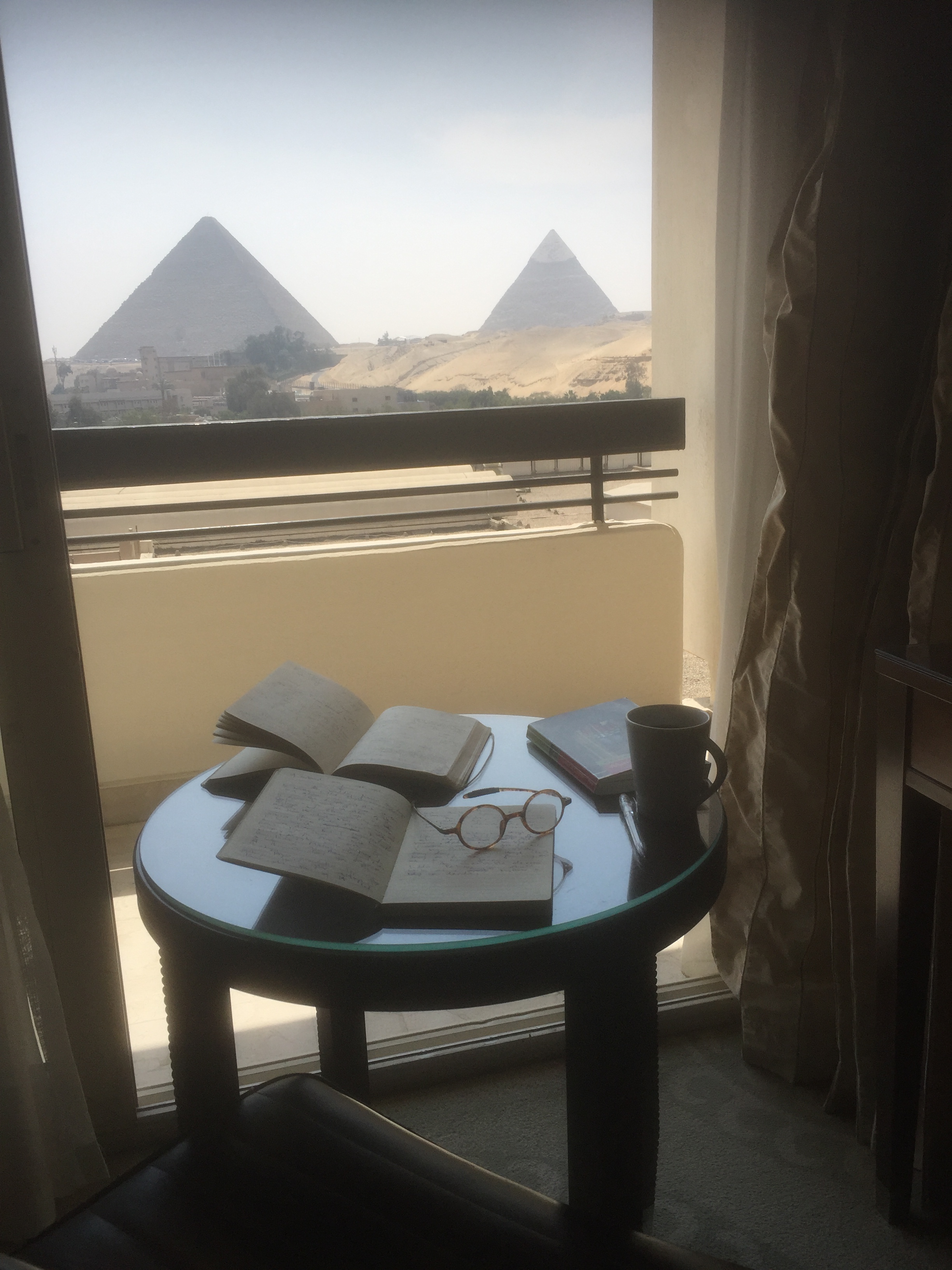 One of my favourite writing spots

We are pleased to say that the first three books are now out as audiobooks, all narrated by David McCallion, for Whole Story QUEST.  He’s done a great job on them.
The Gathering Murders came out on 6th September. 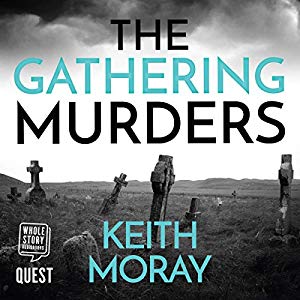 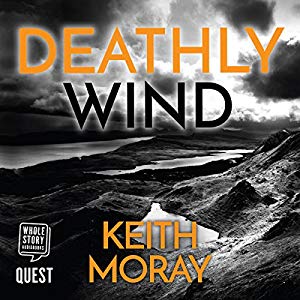 and Murder Solstice came out on 4th October. 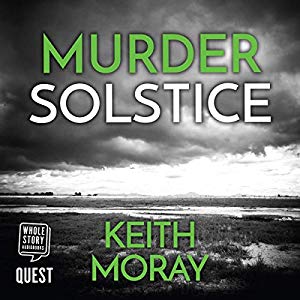 You can find them on Amazon:
THE GATHERING MURDERS
DEATHLY WIND
MURDER SOLSTICE

My YA gothic novel is published by Sundown Press on May 15. 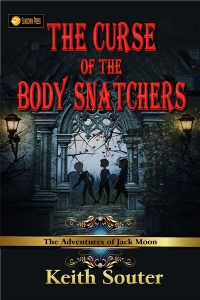 Victorian London is a dangerous city to be alone in at night for 12-year-old orphan, Jack Moon—and his business in those forbidding streets would make a grown man cringe. But his best friend, Danny, has just died, and Jack has promised him a burial in a haunted cemetery beside the woman who cared for them.
Living in a rat-infested warehouse, Jack ventures out into the London fog, where he is waylaid by Professor Stackpool, a phrenologist. Can he really read a person’s character by examining their head? He claims Jack is a prime example! But at a public demonstration, he announces Jack is a typical London urchin, destined for a life of crime, and Jack revolts.
Benevolent Sir Lionel Petrie and his granddaughter, Olivia, are outraged. To prove Stackpool wrong, the kind judge gives Jack a job at his home. Olivia and Jack become great friends, but something sinister is going on—and Olivia is becoming gravely ill over and over again.
Someone is out to kill Jack, but who? And why? When tragedy suddenly strikes, Jack vows to save Olivia, and he is forced to enter the world of séances, ghosts, and ghouls. Will Jack live to bring Olivia back to her grandfather? Can they all survive the CURSE OF THE BODY SNATCHERS?

The Curse of the Body Snatchers

We are pleased to say that people seem to be enjoying Torquil’s adventures.

The first novel, THE GATHERING MURDERS  has been Amazon Kindle  No 1 Bestseller in Hard-boiled crime today, April 26. 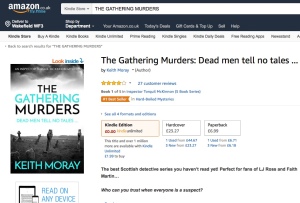 And on this same day, DEATHLY WIND and MURDER SOLSTICE (published today) are 2 and 3 in Scottish Crime bestsellers. 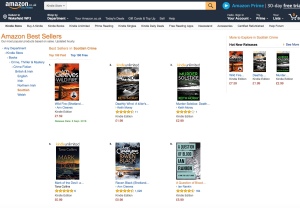 And as you can see, we are in pretty exalted company!
The fourth adventure, FLOTSAM & JETSAM comes out on May 1.
The fifth comes out in June, so we’d better get on with the next!

I am happy to announce that Sapere Books will be reissuing my Inspector McKinnon Mysteries in 2018. Below is the new cover for the first book in the series, The Gathering Murders. 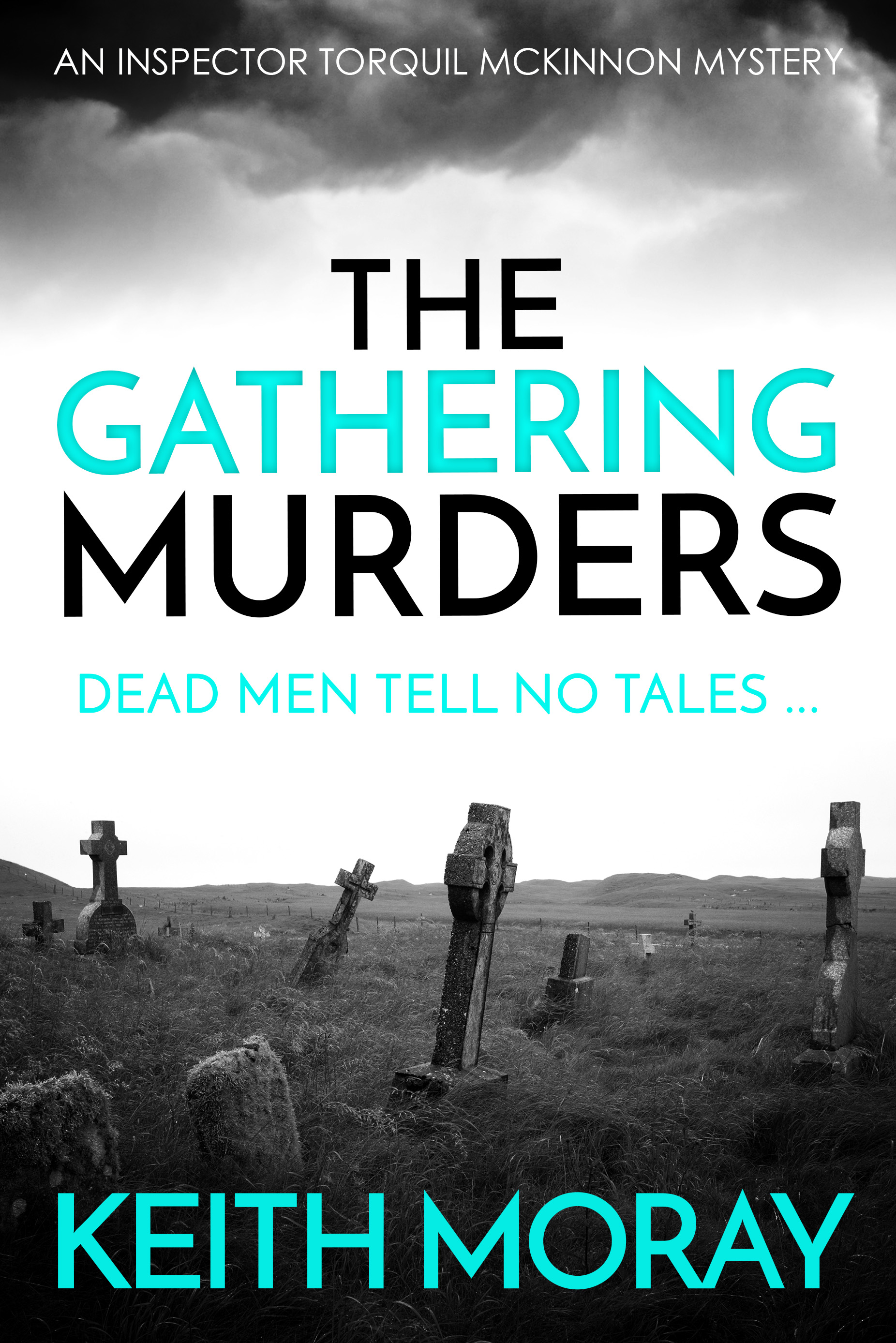 This post is not about West Uist, but about the Old West.

I am pleased to say that my alter ego Clay More has a story called LARIAT LAW  in this anthology  BEST OF THE WEST, published by Sundown Press today. There are 14 stories written by some of the finest western writers working today – mine slipped in there somehow!

It is a tale about Doc Marcus Quigley, my itinerant dentist, gambler and occasional bounty hunter. 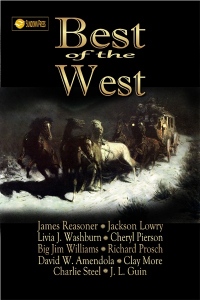 My novel Dry Gulch revenge is out on July 1, 2017 in Large Print from Linford Western Library. 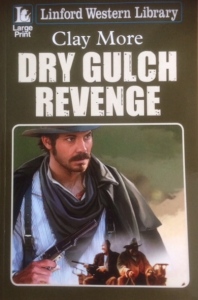 Hank Hawkins has the opportunity to achieve his ambition of buying a ranch. All he has to do is help a gang rob the stage in the Devil’s Bones canyons. But it turns out the bandits never intended to leave anyone alive – including him… Upon regaining consciousness, Hawkins vows to track down the murderers who betrayed him. But when he sets off, he has a companion accompanying him: Helen Curtis, the fiancee of the messenger whose death lies heavy on Hawkins’ conscience. 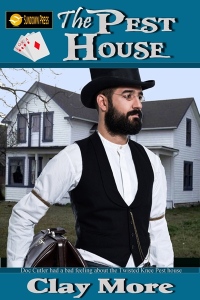 My short story, The Pest House is out today from Sundown Press.
Twisted Knee, Ohio, 1866Nothing could ever damp down the smell of the pest house.Especially not in the sweltering heat of summer.It was a strange, stomach-twisting smell that wafted from the two chimneys that belched smoke most days when the place was full of patients. And even when the smoke was dispelled by the wind the odor hung like a miasma around the old two-storied timber building a couple of hundred yards from the edge of the town of Twisted Knee.But the smell was only a prelude to the evil that took place in the old building that housed the wounded, the diseased, and the hopeless. Though Doctor Cutler had his own faults, murder was not one of them—and that was going to be the death of him…
THE PEST HOUSE
£0.99 or £0.00 on Kindle Unlimited
KEITH MORAY – CRIME FICTION AUTHOR
Blog at WordPress.com.
Loading Comments...