Well folks, here we are, getting ready for Burns Night. Time to check the kilt, brush the sporran and make sure that the Sgian Dubh has none of last year’s haggis on the blade.

Only kidding there, because although my best Sgian Dubh has been used in the address to the haggis on many Burns Nights it is always washed thoroughly as such a respected dagger should be.

Sgian Dubh is Gaelic for the ‘black dagger’  (sgian, meaning dagger and dubh, meaning black.) This is pronounced skee-an-doo. It was called this because it was traditionally made from black bog oak. The one on the right in the picture is made of bog oak and the one on the left is made from deer horn. Note the jewels on the ends and the ornamentation. This was because the highlanders apparently distrusted paper money so carried their valuables on their person, as on the sgian dubh and in the form of their silver belt buckles and sporrans. 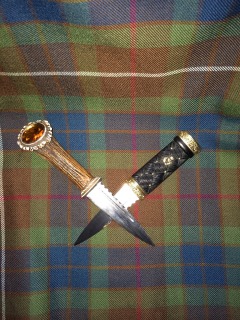 In the old days the sgian dubh would be concealed, except when visiting friendly neighbours. Then it would be removed from its concealed place and put somewhere visible – but still accessible – usually in the top of the stocking. On the right for a right sided man and on the left if you were left handed, hence its place there in traditional highland dress.

And so, in anticipation of tonight, you might have a glass of good Glen Corlan, or whatever your favourite malt whisky may be, and we wish you  slàinte math! This means ‘good health’. (It is pronounced as ‘slaancha vaa’).