We are slighted to say that Keith Moray’s novel, The Gathering Murders, the first in the West Uist series has been published in Czech, under the title Vraždy na Hebridách. 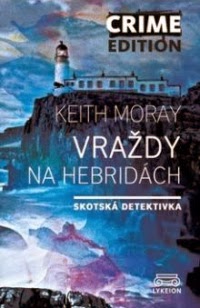 All of us here at the West Uist Chronicle think it is a bonnie cover!

It was published in the Czech Republic on 29th January 2014 and here is a review. (Google translated from Czech)

The hero is the young inspector Torquil McKinnon, who is preparing for a bagpipe competition during the annual literary festival. He is known to his friends as Piper. The literary festival and highland gathering on the island brings a diverse mix of tourists, writers and fans to the island – and a mysterious villain, who, according to the prologue has just murdered their relatives.

Keith Moray simply writes about the Scottish islands without frills, but is quite optimistic – a lot of Gaelic, golf and enthusiastic young people. However, police on the island consists of three people with a low average age, and none of them are  melancholy – but that does not want to touch Inspector Perez , I loved it and I hope that they come from other parts of Shetland series … But just cops Torquil , Morag and Ewan are quite balanced and happy nature.

We have , however, several candidates to be murdered. Fiona is a hot tip, the author of detective stories inspired by real cases and persons. Her next book is said to be about someone from the island Oddly enough, the first corpse will be a different kind of writer , also a participant of the festival, poet Ranald Buchanan.

New episodes investigation par excellence, západouistský police force is busy, and even have to take on auxiliary constables (although the Drummond twins only seem to share a brain cell.) Island is closed , no one is allowed to sail because, as possibly explained Sergeant Driscoll officer McPheeovi ” Ewan , dear, right now they are in the West Uist suspects absolutely everyone ! “

But as the investigation goes always slow addition of three people and an island full of suspects , it was necessary to increase the risk escalate adversity really dramatize the plot . Author accomplish the threat Dudáková superior that the quest have 24 hours – before they will lift the embargo , the suspects leave and arrive commander, will take over the case and the buggers . Time is running …

Murders in the Hebrides is a straightforward thriller that does not even attempt to play something else. Although they are quite manage to subtly show life on the island as it is today. When the modern era struggles with ancient legends and superstitions of the seal where men Selkie investigating inspector who travels around the island on a motorbike and a leather jacket. I enjoyed every page and in the spirit marveled at how the author managed to tangle ties and motives of a few key characters , as featured here . And until the last chapter, I believed that there was finally a Scottish thriller that is NOT depressed. I hope that we will see other cases pipers McKinnon and his two-member division – good reading can please , though rainbow ends and alpenglow …