The world has been horrified by the pictures and news of the devastating earthquake and the tsunami that has hit Japan. We were relieved to hear that fellow western writer Charlie Whipple, who writes as Chuck Tyrell, is safe. He and his family are OK, but the country is in bad shape. He lives in Chiba, at the southwestern tip of the earthquake destruction. There are huge queues for supplies and power supplies are being rationed. 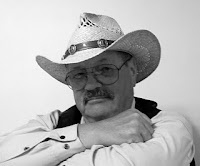 Please buy one of his westerns available from Kindle via Amazon Kindle Store or through Smashwords.

This was Chuck’s first western novel, originally published by Robert Hale’s Black Horse westerns in 2005, now re-issued as an ebook by Solstice Westerns.

“Sometimes a man’s gotta take a stand.” – Shawn Brodie, aged 14.
Arizona, 1882. Falsely accused of theft, Shawn Brodie is sent to serve three years in the Hellhole called Yuma Territorial Prison. Lamb to the slaughter, maybe?
This is what they are saying about it:

“Remarkable. A page turning thriller set in a frontier prison where a boy convict learns about the tough world of survival as he grows into a man. Told with gritty courage and honesty – a surprising blend of East and West, it’s a coming-of-age story like none you’ve ever read.” – Corinne Joy Brown, author of McGregor’s Lantern, Sanctuary Ranch, and Come and Get it!

“Though young, Shawn has the strong moral fiber to survive, no matter what comes his way. Chuck Tyrell has produced a memorable hero and a grim, gritty yet very real tale of brutality leavened with kindness, despair salved with hope, and ultimately an inspiring testament to a young boy’s journey into manhood.” – Ross Morton, author of The $300 Man

“Chuck Tyrell has brought authenticity and poignancy to a western with a difference…”
– Jack Martin, author of The Ballad of Delta Rose.

We are sure you will enjoy the read.